A story by ABC News regarding Texas’ number of cases and deaths related to the coronavirus since the state’s reopening on May 1 is going viral. The article presents misleading numbers that don’t appear to take increased testing and deaths related to pre-reopening contracted cases into account. An article by the news network’s Houston affiliate directly contradicts the national fake news story.

ABC News reported on Saturday that “Texas has seen a steady rise in novel coronavirus cases and fatalities since reopening just over two weeks ago.” While statistically, that number is true, it does not take into account the massive increase in coronavirus testing in the Lone Star State in recent weeks and the lag in reporting caused by a backlog of coronavirus testing.

A more accurate story published by KTRK ABC13 in Houston appears to directly contradict the national news article. The article, originally headlined “No sign of COVID-19 spike since Texas reopened, hospitalization numbers remain flat.” That headline has since been changed to, “COVID-19 cases still rising across Texas, hospitalizations remain flat.” 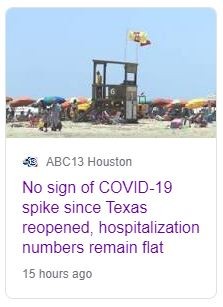 The office of Texas Governor Greg Abbott responded sharply to the ABC News article in a phone interview with Breitbart Texas Saturday morning.

“We have done more testing in the first 16 days of May that we did in the previous two months combined,” said Abbott’s Communication Director John Wittman. “The percentage of positive test results is decreasing steadily.”

Wittman said that on April 13 the positive test result was about 13 percent of those tested. At that time, Texas was testing about 8,000 people per day. On April 15, the percentage of positive test results fell to about 5 percent, Wittman said. Texas is now testing at the rate of about 17,000 tests per day, according to HealthData.org, a website published by the Institute for Health Metrics and Evaluation in Seattle, Washington.

“The governor has been clear all along that as we test more people, the raw numbers will rise,” Wittman said.

Houston Public Health Authority’s Dr. David Persse told ABC13’s Nick Natario it is too early to draw conclusions about the raw numbers. “If it were me, I would probably wait another two weeks to see what happens,” Dr. Persee said. “I think that because of the lag in reporting, what we’re looking at today, may not be reflecting what we think it is.”

The governor’s office and ABC13 appear to agree that a better indicator is the number of people hospitalized.

One thing that is reflecting today is hospital numbers. There are fewer coronavirus patients at the Texas Medical Center than in April.

And statewide, as of Thursday, there were 130 fewer people in the hospital compared to two weeks ago.

The Texas Department of State Health Services reports that on May 15, there were 1,716 people hospitalized in Texas with COVID-19. The number of hospitalization has remained relatively flat since about April 22.

The ABC News article then delves into the number of deaths in Texas, reporting:

The state also experienced its highest and second-highest daily death toll just a day apart. On Thursday, 58 deaths were recorded in 24 hours and Friday that number dropped only slightly to 56, according to the health department. The total number of fatalities is at 1,272.

Wittman took exception to that report as well, saying the deaths are a lagging indicate from cases contracted long before the re-opening of Texas.

“In fact,” Wittman said, “Texas has the lowest per capita death rate of any state in the country.”

The number of COVID-19 related deaths in Texas is about five per 100,000 people, according to the Washington Post. Only nine states have a lower per-capita death rate than Texas.