A GOP legislator and 19 co-sponsors are pushing legislation to bar sanctuary cities in Georgia.

This legislation is directly in line with President Donald Trump’s agenda and the agenda that Governor Brian Kemp ran on, and the Republicans across the state have talked about for years.  I’m very hopeful that they will decide to legislate the way that they campaigned.

This is extremely important for Georgia, not only for the safety of the immigrant community but also for the safety of every Georgian. And it’s important, especially in a major election year, that the voters see that the conservatives that they’ve elected will actually get legislation improving their lives like the [candidates] promised.

A July 2018 report by the left-wing Georgia Budget and Policy Institute said the roughly one-third of all immigrants in the state are  “unauthorized immigrants.” The estimated population of 377,000 illegals outnumbered the resident population of 260,000 green card holders and was close to the population of 427,000 immigrant citizens.

The population of illegals nudges up crime rates, pushes down Americans’ wages, and boosts housing prices. But business groups welcome the extra population because it provides more workers, customers, and renters to businesses. 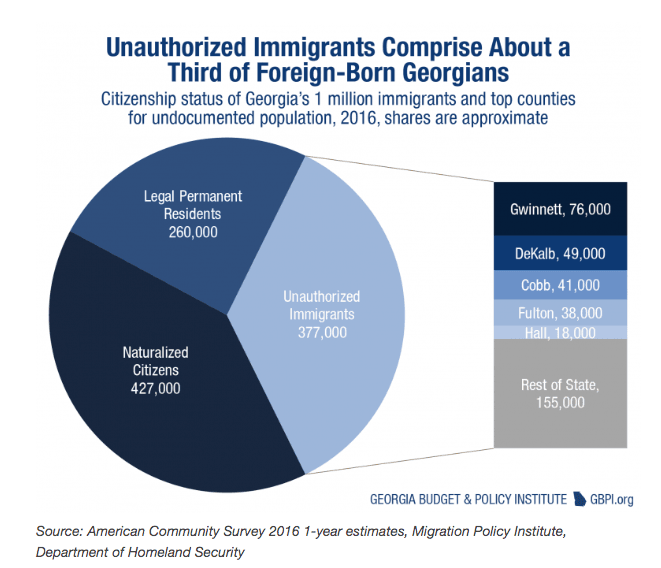 Their HB 915 bill would require the state to support federal immigration enforcement efforts and prevent any local obstruction. A statement at InsiderAdvantage.com from Singleton said:

State entities and agencies would be required to comply with federal immigration detainers and would be prohibited from withholding information or records from federal immigration enforcement efforts regarding an immigrant’s status. Additionally, the bill would encourage a seamless transfer process regarding illegal aliens who are held in a state’s correctional facility to be transferred into federal custody. Under this bill, it would also be illegal for state or local law enforcement officers who have custody of an illegal to deny or knowingly fail to comply with an alien’s detainer’s requests.

My bill is carefully modeled from the 2017 Texas SB-4 and 2019 Florida SB-168 bills. They have both been signed into law in their respective states and have both been upheld in federal court rulings.

However, Singleton and the cosponsors need the support of top GOP leaders for the bill to become law, said King.

“What’s required for this bill to pass is [first] a hearing in a subcommittee, then a full committee hearing at the Judiciary Committee, and then it has to go from [the] judiciary [committee] to [the] rules [committee], and then from rules to the House floor before legislative day 28,” he said.

“Nothing happens in the House without [Speaker David] Ralston’s approval — I mean nothing … [and so far], there’s no public support from any part of leadership in the House.”

GOP Gov. Brian Kemp will likely sign the bill if it reaches his desk, said King. “He has not spoken up on the topic yet.”

Singleton’s bill is likely to be opposed by business groups that gain from the increased population, but also by various left-wing and progressive groups which favor the increased movement of Democratic-leaning migrants into the state.

Mark Zuckerberg & his investor friends get together to lobby for more cheap labor & imported consumers in Georgia. But the state media prefers to view this $$ lobbying as a racial issue. https://t.co/v1xE9MdrVB

The goal was to just get 15 [signatures] to file it, so we got more than we thought we would need to file it. But you know, I think the goal should probably be 40 [signatures out of 104 GOP legislators] to try to help give a little bit more pressure on the leadership. Really, we just want the leadership to support the agenda that they talked about on the campaign trail.
So we really want to get it through committee and vote it through on the floor before Crossover Day [around day 28 of the session]. We want to try to get it done in the next two weeks. [and] we’re waiting to know when it’s going to go before the committee

“I ran for office because, you know, I felt like we needed more people in office that would do what they said they do,” Singleton told Breitbart News.

https://t.co/rMcu0vygjZ funded a study to block @GovRonDeSantis' push for a @EVerify law excluding illegals from jobs.
Yet study admitted CEOs will have to hire Americans at higher wages: It is "unlikely .. [open jobs] would be filled at current wages.”https://t.co/B8QoODrvOQ