Joe Biden has pushed a message urging healing in America. Yet, some of his most ardent supporters in Hollywood aren’t heeding his call. Take actor Ron Perlman. The Pinocchio and Hellboy star is the latest celebrity to attack conservatives, taking to Twitter on Tuesday to fantasize about a sexual attack on Sen. Lindsey Graham (R-SC).

“I feel like Lindsey Graham is ripe for an ass fucking,” said Ron Perlman in a tweet he has since deleted. 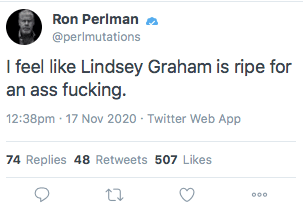 It’s unclear what prompted Perlman to publish his vile aimed at Sen. Graham, it appears to be in response to a story about the senator’s alleged conversation with Georgia Secretary of State Brad Raffensperger.

“What in the actual fuck, [Lindsey Graham]? You are a disgrace,” tweeted actress Alyssa Milano on Tuesday. “Georgia secretary of state says Lindsey Graham implied he should try to throw away ballots.”

What in the actual fuck, ⁦@LindseyGrahamSC⁩? You are a disgrace.

Georgia secretary of state says Lindsey Graham implied he should try to throw away ballots https://t.co/a9lrWsiEWQ

Milano was reacting to a CNN piece, which stated that Raffensperger said Graham had hinted that he should try to discard some ballots in Georgia, where a recount is underway.

“He asked if the ballots could be matched back to the voters. I got the sense it implied that then you could throw those out if you look at the counties with the highest frequent error of signatures. So that’s the impression that I got,” said Raffensperger of Graham.

Regardless of what prompted Perlman, this was not the actor’s first time attacking conservatives and America.

Over the summer, Ron Perlman declared America a “shithole country” with a “diseased” population.

“Americans under Donald Trump have been banned from entering into Europe,” said Perlman after Americans were barred from entering the European Union because of an uptick in coronavirus cases. “Because we are diseased. Yes my friends, in 3 short years this reality show clown has turned us into a Shithole Country.”

Last year, Perlman exploded on the Republican Party, calling it the “KKK party” in an unhinged rant.

“Hey Kevin McCarthy! Ted Cruz! Steve Scalise! How dare you suddenly start condemning the Nazi that is Steve King when you’ve been cheering him on for his entire embarrassing career! You are the KKK party. Own it muthafuckas! And one more thing… FUCK YOU!” said Perlman.

Congratulations Mr. President elect Joe Biden, Ms. vice president select Kamala Harris. And most of all congratulations to America for returning to sanity.

Perlman is not the only celebrity to have made disparaging remarks about conservatives in the wake of Biden and Harris calling for “unity” and “healing.”

On Tuesday, actress Rosanna Arquette took to Twitter to smear tens of million of Americans, claiming that the GOP are “Nazi gestapo” that “blindly follow their insane unhinged leader and commit crimes against humanity.”

“The Gop are Nazi gestapo they blindly follow their insane unhinged leader and commit crimes against humanity,” wrote Arquette.

The Gop are Nazi gestapo they blindly follow their insane unhinged leader and commit crimes against humanity.