The ad features a 2017 photo of President Donald Trump together with Sen. Marco Rubio (R-FL) and veterans of Brigade 2506, the group of Cuban exiles sponsored by the CIA to overthrow Castro in the failed Bay of Pigs invasion.

“Working together, and united by our faith, we will defeat socialism and the dictatorships in Cuba and Latin America,” the ad reads. “God bless you and the people of Cuba.”

The ad will run in a special print edition of the Diario Las Americas Spanish language newspaper in Miami. 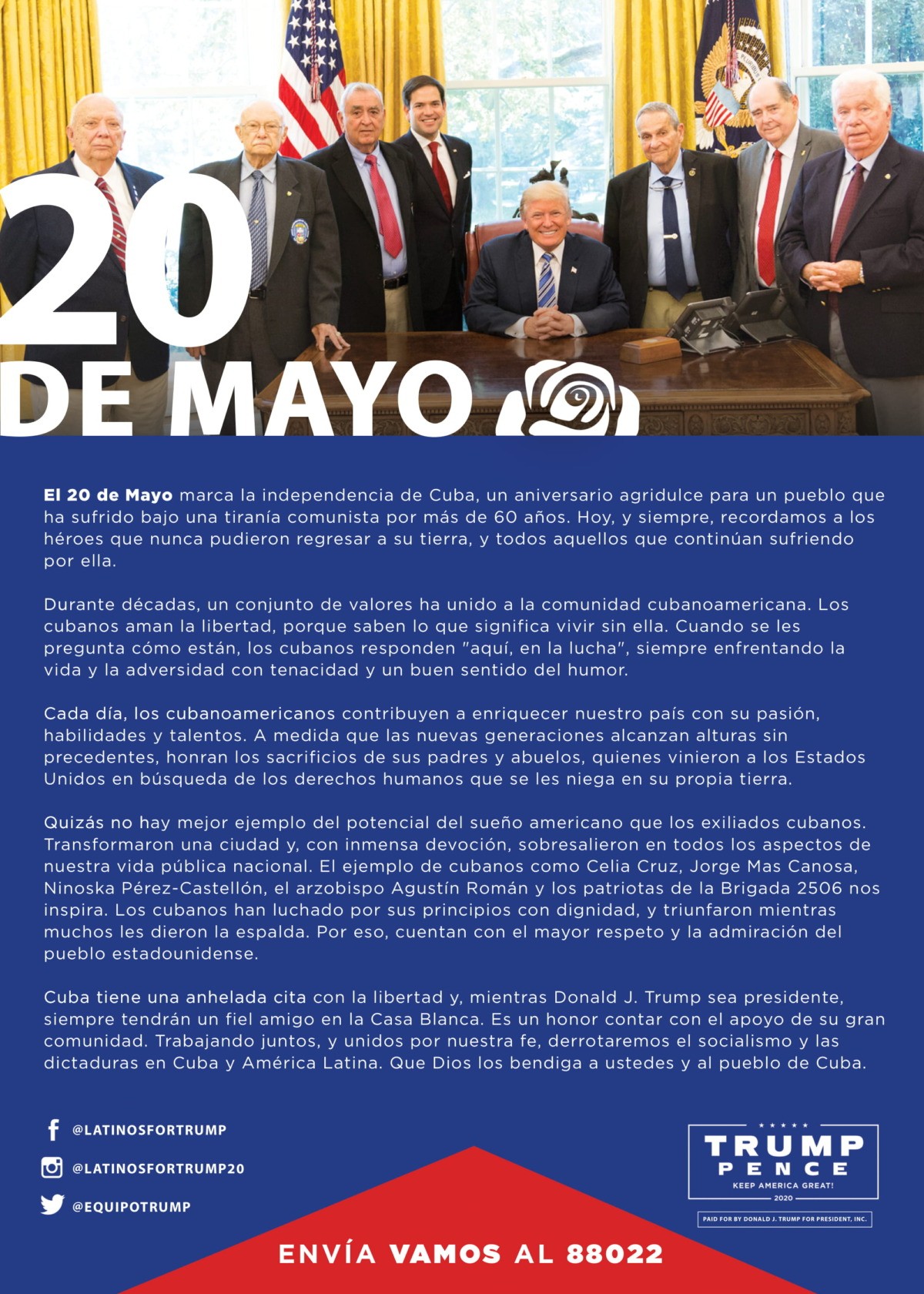 The president also issued a video from the White House signaling his support for the Cuban-American community.

President @realDonaldTrump stands with the people of Cuba as they celebrate Cuban Independence Day! pic.twitter.com/m9RUFeuyqA

The 20th of May marks the independence of Cuba, a bittersweet anniversary for a people who have suffered under a communist tyranny for more than 60 years. Today, as always, we remember the heroes who could never return to their homeland and all of those who continue suffering for her.

For decades, a set of values has united the Cuban-American community. Cubans love freedom because they know what it means to live without it. When you ask them how they are, they respond, “here, in the struggle,” always facing life and adversity with tenacity and a good sense of humor.

Every day, Cuban-Americans contribute to enriching our country with their passion, abilities, and talents. As new generations reach unprecedented heights, they honor the sacrifices of their parents and grandparents, who came to the United States seeking the human rights they were denied in their own land.

Perhaps there is no better example of the potential of the American dream than the Cuban exiles. They transformed a city and, with immense devotion, excelled in all the aspects of our national public life. The example of Cubans like Celia Cruz, Jorge Mas Canosa, Ninska Pérez-Castellón, Archbishop Agustín Román, and the patriots of the 2506 Brigade [the Bay of Pigs vets] inspires us. Cubans have struggled for their principles with dignity and have triumped when many turned their backs on them. Because of this, they can count of the utmost respect and admiration of the American people.

Cuba has a yearned-for appointment with liberty and, so long as Donald J. Trump is president, will always have a loyal friend in the White House. It is an honor to count on the support of your great community. Working together, and united by our faith, we will defeat socialism and the dictatorships in Cuba and Latin America. God bless you and the people of Cuba.