“There are increasing reports and investigations that white supremacists may be infiltrating these protests, breaking windows and destroying property,” said an Instagram post by Ocasio-Cortez. “If anything seems off to you, DOCUMENT IT. Always check who is organizing,” 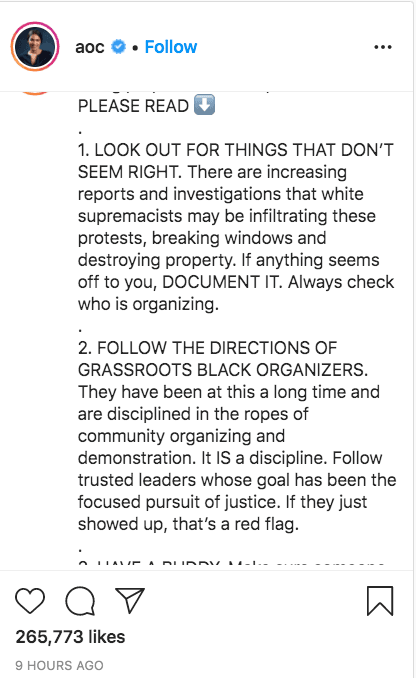 If you are at a demonstration and something doesn’t seem right, this could be why.

Reid said she got her information from Democrat leaders in Minnesota, including Melvin Carten, the Mayor of St. Paul, next door to Minneapolis:

He adds that white nationalist groups are posting messages promoting going to Minneapolis to “get our loot on” and cause mayhem. He says they will investigate those using the outrage over the murder of George Floyd as a “cover” for illegal activity

We are now confronting white supremacists, members of organized crime, out of state instigators, and possibly even foreign actors to destroy and destabilize our city and our region.

But the message quickly spread far beyond Minneapolis, to Reid and others.

“Police didn’t stop the white nationalists they said made a mockery of the George Floyd protests and used real protesters as human shields, but in city after city police forces largely appear to be the aggressors against protesters and even journalists tonight,” said a tweet from Reid.

Police didn’t stop the white nationalists they said made a mockery of the George Floyd protests and used real protesters as human shields, but in city after city police forces largely appear to be the aggressors against protesters and even journalists tonight. (@AliVelshi is ok!) https://t.co/9xV1K5L2WQ

What I heard from Minnesota officials — all of them — was that white nationalist groups are planning online, to blend into the protests and stir chaos, "using the legitimate protesters as a human shield." What logical reason would LEFTwing groups have to burn black communities?

The “white nationalists” theme was also pushed by Jonathan Capehart, a member of the Washington Post’s editorial board:

The Attorney General failed to acknowledge the white nationalists involved in the protests, as warned by every Minnesota official who has spoken today.

The Democrats’ claims came as other tweets suggested that “far-right extremists” hope for more violence. But a report by Vice.com did not provide any evidence that “white nationalists” were leading the riots:

Far-right extremists are showing up, with guns, to the protests against police brutality that have exploded across the country.

Others are egging on the violence from behind their computers, urging followers to carry out acts of violence against black protesters with the goal of sparking a “race war.”

Their presence makes an uneasy addition to the escalating unrest, which was triggered by the death of George Floyd, a black man who was choked to death by a white Minneapolis police officer earlier this week.

The article cited a few “far-right extremists” standing at the periphery of left-wing protests, under the dramatic headline “Far-Right Extremists Are Hoping to Turn the George Floyd Protests Into a New Civil War.”