President Trump’s Department of Justice (DOJ) has arrested more than 600 MS-13 Gang members since the start of his presidency, the overwhelming majority of whom are illegal aliens.

A comprehensive report by the DOJ reveals the agency’s efforts to tackle the El Salvador-based MS-13 Gang — where members often kill for sport — over the last four years. Since 2016, DOJ prosecutors have charged 749 MS-13 Gang members with crimes, resulting in at least more than 500 convictions.

Since Trump took office, about 378 MS-13 Gang members have been convicted — including 37 of which who were delivered life sentences for their involvement with the gang’s criminal activity. Another 154 MS-13 Gang members, since 2017, were sentenced to at least 61 months in federal prison.

In February 2017, Trump signed an executive order that directed the federal government to dismantle transnational criminal organizations, which includes the MS-13 Gang. As part of the order, Trump requested the DOJ work more closely with other federal agencies to take down criminal organizations.

Then, in August 2019, Attorney General William Barr created a task force for the sole purpose of eradicating the MS-13 Gang from the U.S. with increased coordination from officials in El Salvador, Mexico, Honduras, and Guatemala.

“In 2017, the President directed the Department of Justice to go to war against MS-13, and we did just that,” Attorney General Barr said in a statement.

DOJ officials write that the MS-13 Gang has been able to grow exponentially in the United States thanks to lax enforcement of federal immigration laws and loopholes at the southern border. The result has meant that the MS-13 Gang now has a presence in about half of all U.S. states. 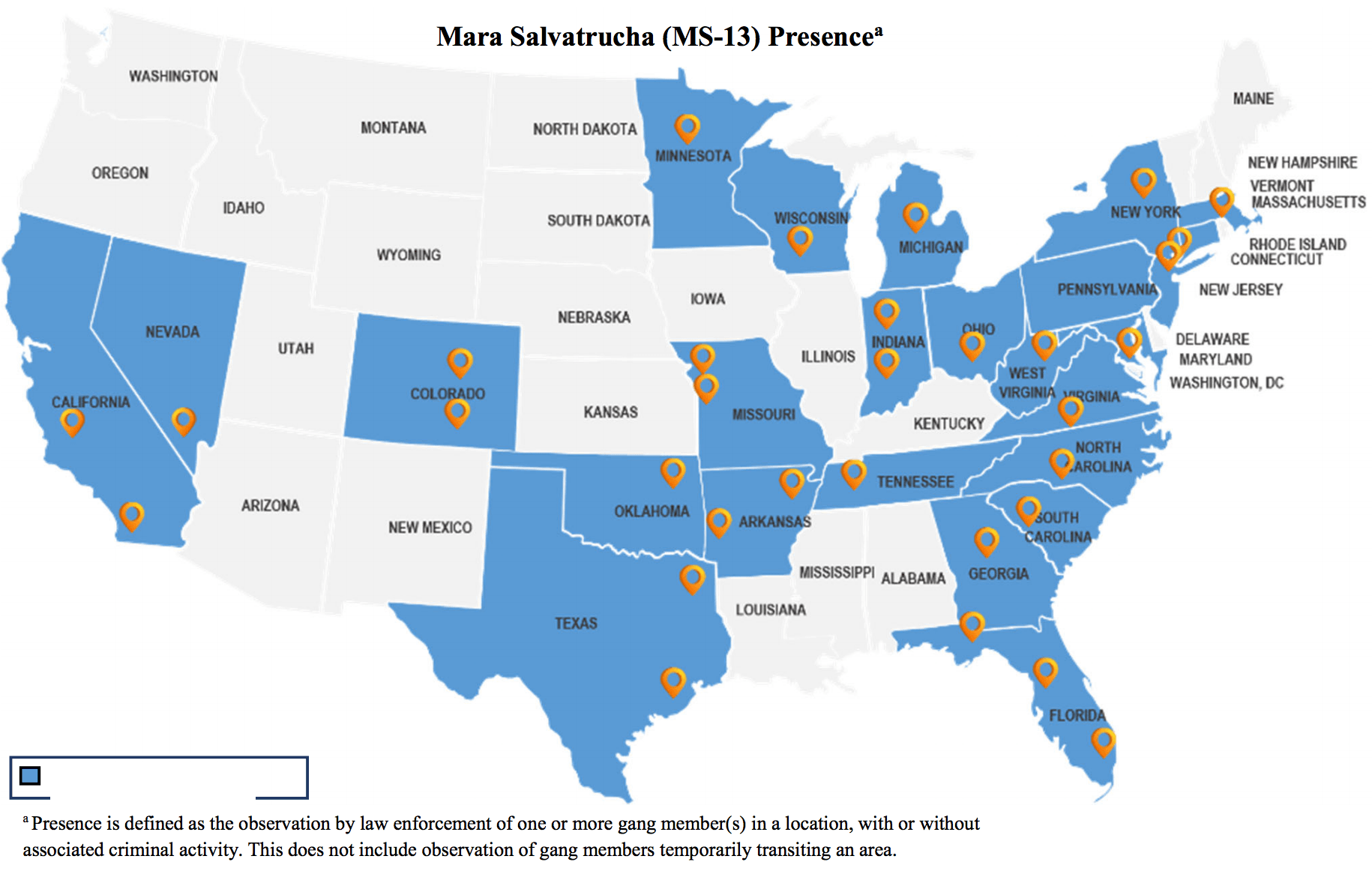 (Screenshot via Department of Justice)

In total, about 74 percent of all MS-13 Gang members arrested since 2016 have been illegal aliens living in the U.S. Another three percent of those gang members were legal immigrants and 15 percent did not have a known immigration status. 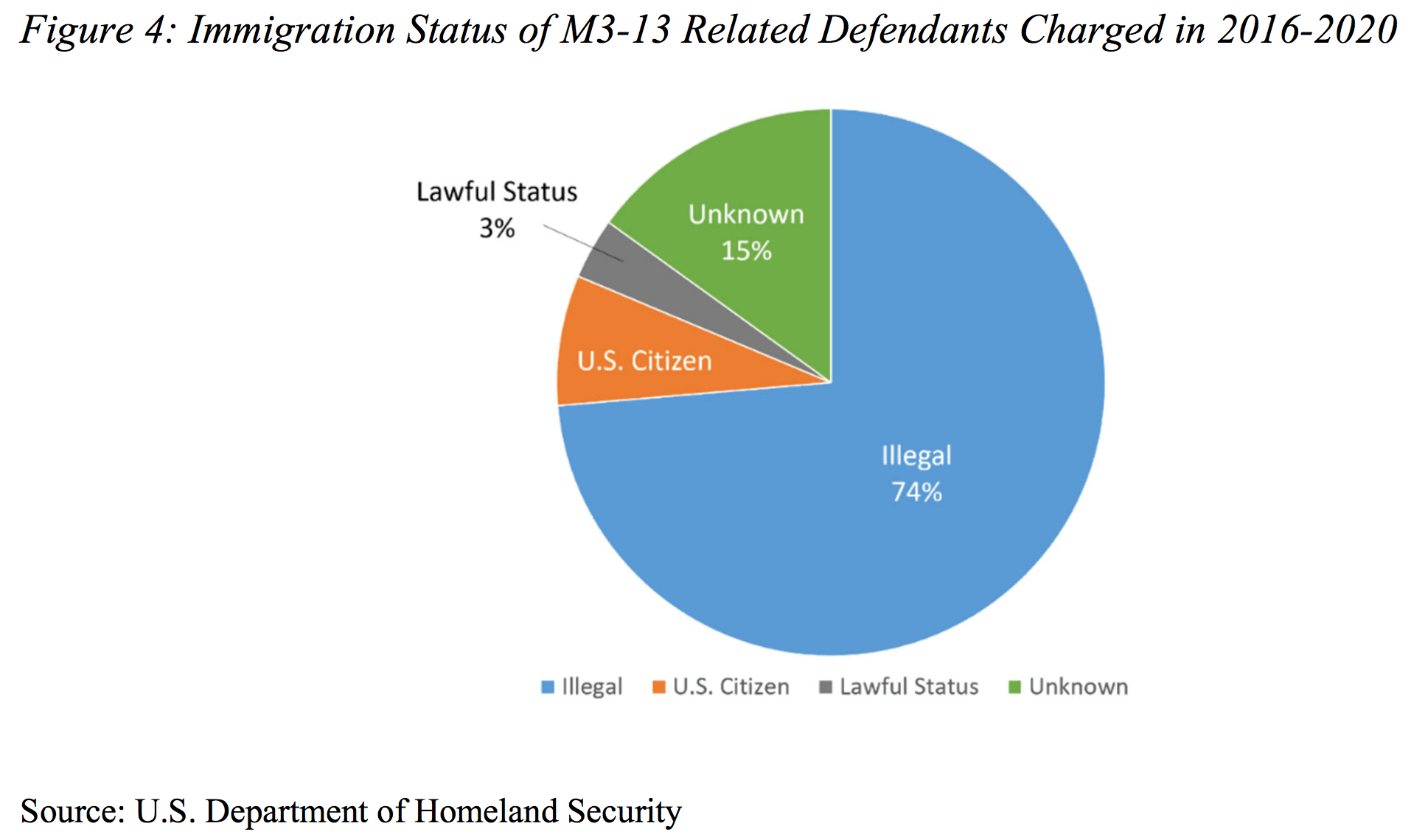 (Screenshot via Department of Justice)

Currently, the DOJ is seeking the death penalty in two MS-13 Gang cases. In one case, MS-13 Gang member Alexi Saenz is accused of murdering seven individuals between 2016 and 2017 in New York. Four of the victims were local high school students and six of the seven victims were killed with a machete or a baseball bat.

The DOJ is seeking the death penalty against Saenz.

In another case, MS-13 Gang member Elmer Zelaya Martinez is accused of helping to coordinate the murders of a 17-year-old victim and a 14-year-old victim in 2016 in Virginia. The DOJ is seeking the death penalty against Martinez.

Trump, during a speech in Long Island, New York in 2017, promised that his administration would “destroy” the MS-13 Gang’s presence in the U.S.

“Together we’re going to restore safety to our streets and peace to our communities and we’re going to destroy the vile, criminal cartel MS-13 and many other gangs,” Trump said in the speech.

Part of dismantling the MS-13 Gang includes closing loopholes at the U.S.-Mexico border to stem the flow of illegal immigration and the exacerbated use of the Unaccompanied Alien Children (UAC) program where child border crossers, who arrive alone, are released into the interior of the country.

The majority of UACs are teenage boys, and thus the program is widely used by the MS-13 Gang to recruit new arrivals to their ranks.

This Fiscal Year, the Trump administration has hugely reduced the inflow of UACs released into the interior of the country. From October 2019 to August 2020, less than 16,500 UACs have been released into the U.S. — a reduction of about 70 to 77 percent compared to Fiscal Year 2019.