As election results trickle in and uncertainty abounds, radical progressive groups have begun to execute the national chaos they have long organized and trained for.

The civil unrest left-wing groups prepared for in the event that elections didn’t go their way has begun to unfold in pockets throughout the U.S. with major scuffles in the country’s capital.

Thousands of left-leaning demonstrators took to the streets on Tuesday in Los Angeles, Raleigh, Portland, Seattle, Washington D.C. and other cities, with Minnesota seeing over a dozen arrests and many protesters already gearing up for a longer, more sustained pushback.

While the protests may appear to be spontaneous, many were planned weeks in advance.

More than 520 events have been organized nationwide by Protect the Results — a nationwide coalition of more than 165 left-wing activist and advocacy groups as well as labor unions — on November 4 and beyond in the event that the elections do not result in a clear Biden victory.

Expecting a drawn-out battle, ShutDownDC — a member of Protect the Results — plans for more aggressive actions as the week goes on, with plans to “disrupt business as usual for some of the institutions that are most complicit in President Trump’s attack on Democracy” and calling on members to “keep showing up” and “put the media, the party establishments, and the big donors on notice.” 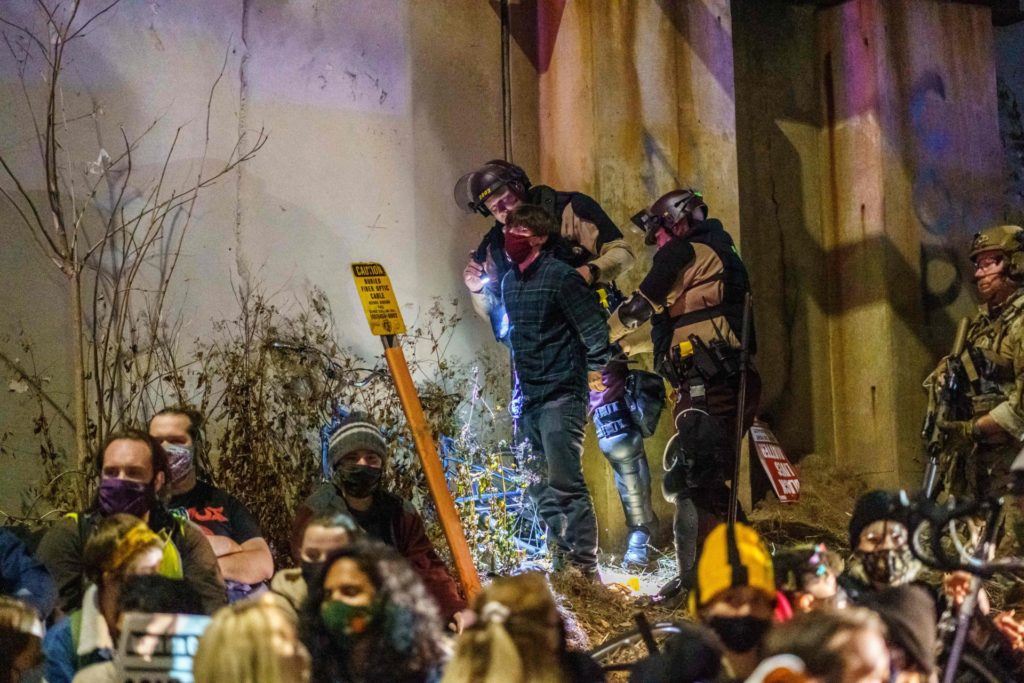 Joined by several other organizations, the group demonstrated outside of Fox News headquarters on Wednesday, demanding  they “tell the truth” and “count every vote.”

“After some short introductions we’ll step off to deliver a dose of democracy to some powerful institutions in Washington, DC,” their site states, adding that they would be “putting the Republican Party and the White House on notice,” as the group intends to mobilize opposite the White House.

Trump has said he would likely take legal action if he believes Tuesday’s election was conducted unfairly, especially in the battleground state of Pennsylvania.

Breitbart News reported extensively on far-left groups who have been organizing, training and preparing for months to execute chaos in the face of undesirable election results.

On Monday, Breitbart News exposed how left-wing groups have been planning their own coup under the guise of preventing one — if things did not go as they desired on Election Day.

One group named “Choose Democracy” states “an immediate massive response is crucial to stopping a coup,“ while providing both ideas for actions to take as well as resources describing “how other countries have successfully prevented coups.”

Millions of people can delegitimize a coup by “demonstrating, resisting orders, and shutting down the country,” their site states.

Proposing individuals become familiar with worldwide coup attempts and tactics necessary to defeat them, the site encourages readers to counter voter suppression on Election Day by documenting “intimidation” and, in the days following, to hit the streets in protest.

“We need an unprecedented number of Americans to take to the streets and stay in the streets until he [Trump] concedes,” Choose Democracy stated in a recent tweet. “But protest won’t be enough.”

Accusing President Trump of a coup attempt, the group claimed to be “monitoring” reactions.

Trump’s premature declaration of victory is a signal to his supporters – members of the media, government officials, and the public – that he needs their collaboration to attempt a coup. We are monitoring their reactions and will update accordingly. pic.twitter.com/2RU2Phzsto

The two groups who are leading the violence in the nation’s capital are part of a massive coalition of well funded far-left groups that have been training and organizing for months to unleash pre-planned chaos throughout major cities across the country to delegitimize anything short of a Biden landslide, Breitbart News was first to report.

“On November 3rd. After you vote, get in the streets! Donald Trump must go and we must make it happen!” reads one post tweeted in August by the far-left ShutDownDC, which partnered with Protect the Results and plans to “rise up to confront the Trump administration’s attacks on democracy” and has been offering training sessions for coalition members to prepare to take “direct action.”

Fearing a Trump win, far-left groups, anarchists and radicals associated with Antifa are beginning to engage in riots which are prone to turn more violent with time.

In Minnesota, a leaked confidential document belonging to TakeAction Minnesota and obtained by Breitbart News, revealed a coalition of left-wing groups there, fearing a possible Trump win, has been preparing for mass unrest while planning to execute wide scale “strategic disruption.”

In Washington DC, over one thousand people demonstrated near the White House on Tuesday night as they awaited further election results and as officers lined the streets. 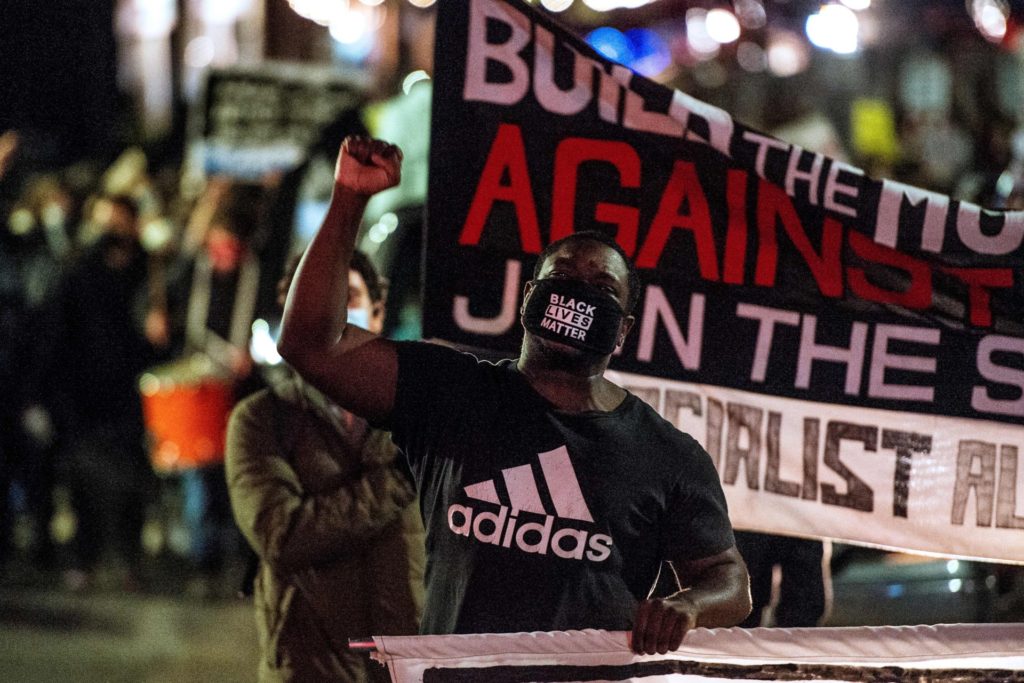 People march through the streets calling for a new political party and system, not happy with either political candidate, in Boston, Massachusetts on November 4, 2020. (JOSEPH PREZIOSO/AFP via Getty Images)

Black Lives Matter (BLM) and ShutDownDC were reported to have organized the D.C. gathering, which was planned to last well beyond Election Night.

During the demonstration, clashes broke out between BLM protesters and pro-Trump supporters outside the White House as police struggled to break up fights and demonstrators set off fireworks and stated their determination to remain for weeks if the president is re-elected.

As tensions mounted, reports on Twitter indicated that police forces in the capital had already made several arrests there.

In addition, four men were stabbed during an altercation police said, according to a reporter.

“If we don’t get it, burn it down!” Protesters on the move in DC this Election Night 2020 #DC #ElectionNight #DCProtests pic.twitter.com/xi0xJhsEzt

Also on Tuesday night, police arrested more than a dozen protesters in Minneapolis after members of a large group began setting off fireworks, spray painting businesses and throwing debris and traffic signs into the road.

Los Angeles police called a “citywide tactical alert” and arrested over 40 protesters for blocking train tracks and a downtown intersection, confronting officers in riot gear and failing to disperse.

Hundreds of protesters in Portland attempting to “shut down” residential neighborhoods,  shouted “No good cops. No good presidents. Give the land back to its original residents,” according to a local reporter.

Seattle police reported at least 8 arrests as people took to the streets in protest, including demonstrators who were leaving nails in a roadway and assaulting officers, according to police.

In Philadelphia, which has seen multiple days of unrest over a police shooting, dozens of left-wing organizations are planning “mass action” in the event of mail-in ballot invalidation, or other electoral discord.

On Wednesday, demonstrations continued to heat up as activist groups affiliated with Protect the Results and other radical groups deployed in major cities as election results remained uncertain.

In Denver, protestors marched through the streets, shouting: “No borders, no wall, no USA at all.”

For some reason clashes are happening right now between protesters and the nypd pic.twitter.com/JtAjv67oA4

Meanwhile, more protests erupted in Minneapolis, with a large crowd blocking traffic on Interstate 94 at Riverside Avenue and arrests made.

East 94 in Minneapolis is taken over by protesters @WCCO pic.twitter.com/BQgVKwIjBg

In Portland, protestors marched through the streets shouting “Fuck [Democratic Mayor] Ted Wheeler” and a local church and a Starbucks were vandalized as protests became violent and Gov. Kate Brown activated the state’s National Guard — for the first time — in response to the rioting.

Deputies arrested a man believed to have thrown a Molotov cocktail at officers as law enforcement confiscated a loaded rifle, additional magazines, commercial grade fireworks, a knife and more  during an arrest.

Members of the radical Antifa rampaged through the downtown area smashing windows and causing wide-scale damage.

As cities across the country brace for continued social unrest in the coming weeks and as incidents grow nationwide, law enforcement officials continue to remain on high alert.

As well-funded anti-Trump groups have prepped the battlefield for chaos and anarchy, and with the left’s hope of a blue landslide gone, the threats of a coup and mass violence are at the doorstep.