In a tweet, Victoria Yeager wrote: “It is w/ profound sorrow, I must tell you that my life love General Chuck Yeager passed just before 9pm ET.”

Fr @VictoriaYeage11 It is w/ profound sorrow, I must tell you that my life love General Chuck Yeager passed just before 9pm ET. An incredible life well lived, America’s greatest Pilot, & a legacy of strength, adventure, & patriotism will be remembered forever.

Yeager entered the history books after his flight in the Bell X-1 experimental rocket plane in 1947.

As Breitbart News reported, once Yeager’s achievement was declassified in June 1948, he was dubbed “The Fastest Man Alive” and awarded the Collier Trophy, the most prestigious honor in aviation.

Yeager’s death is “a tremendous loss to our nation,” NASA Administrator Jim Bridenstine said in a statement, released through the Associated Press.

“Gen. Yeager’s pioneering and innovative spirit advanced America’s abilities in the sky and set our nation’s dreams soaring into the jet age and the space age. He said, ‘You don’t concentrate on risks. You concentrate on results. No risk is too great to prevent the necessary job from getting done,’” Bridenstine said.

“In an age of media-made heroes, he is the real deal,” Edwards Air Force Base historian Jim Young said in August 2006 at the unveiling of a bronze statue of Yeager. 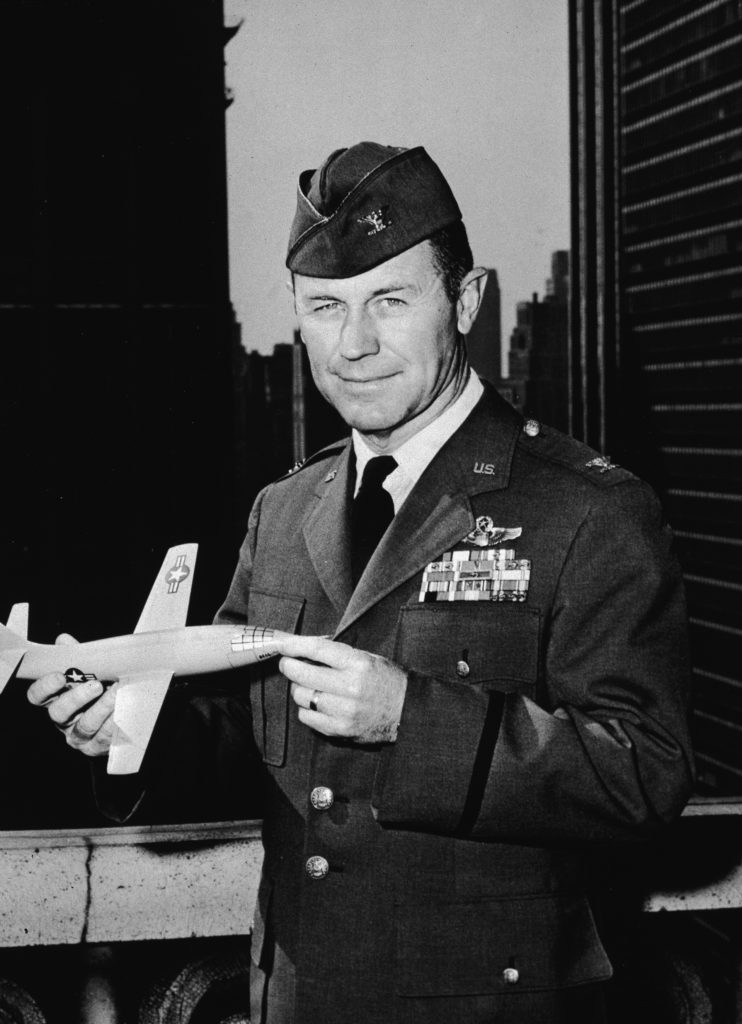 He was “the most righteous of all those with the right stuff,” said Maj. Gen. Curtis Bedke, commander of the Air Force Flight Test Center at Edwards.

Yeager’s success as a pilot and leader was later immortalised in the Tom Wolfe book The Right Stuff, and a subsequent film of the same name.

From his early years as a fighter ace in World War II to the last time he broke the sound barrier in 2012 – at the age of 89 – Chuck Yeager became the most decorated U.S. pilot ever.

Yeager was awarded the Silver Star, the Distinguished Flying Cross, the Bronze Star, the Air Medal and the Purple Heart. President Harry S. Truman awarded him the Collier air trophy in December 1948 for his breaking the sound barrier. He also received the Presidential Medal of Freedom in 1985.

Yeager shot down 13 German planes on 64 missions during World War II, including five on a single mission. He was once shot down over German-held France but escaped with the help of French partisans.

After World War II, he became a test pilot beginning at Wright-Patterson Air Force Base in Dayton, Ohio. 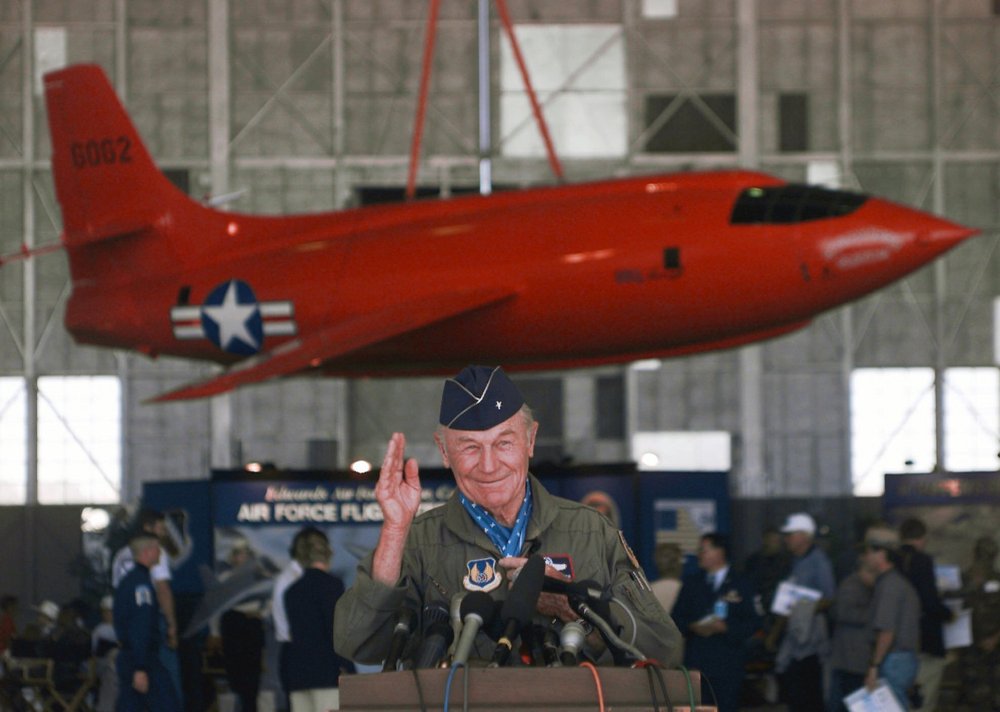 FILE – In this Tuesday, Oct. 14, 1997, file photo, Chuck Yeager explains it was simply his duty to fly the plane, during a news conference at Edwards Air Force Base, Calif., after flying in an F-15 jet fighter plane, breaking the sound barrier once again during the 50th anniversary of supersonic flight. Behind the retired Air Force general is a mockup of the Bell X-1 rocket plane which Yeager flew in the supersonic flight on Oct. 14, 1947. (AP Photo/Michael Caulfield, File)

He returned to combat during the Vietnam War, flying several missions a month in twin-engine B-57 Canberras making bombing and strafing runs over South Vietnam.

“I’ve flown 341 types of military planes in every country in the world and logged about 18,000 hours,” he said in an interview in the January 2009 issue of Men’s Journal. “It might sound funny, but I’ve never owned an airplane in my life. If you’re willing to bleed, Uncle Sam will give you all the planes you want.”

He married Glennis Dickhouse of Oroville, California, on Feb. 26, 1945. She died of ovarian cancer in December 1990. They had four children: Donald, Michael, Sharon and Susan.