EAGLE PASS, Texas — Residents on both sides of the Mexican border with the U.S. have co-existed symbiotically for generations. Local economies rely heavily on legitimate crossover movement. The one-year anniversary of a pandemic ban on non-essential travel through land ports of entry has many business owners and community leaders feeling slighted by Washington. They feel a double standard exists between asylum seekers versus nonimmigrant border commuters.

In March 2020, temporary travel restrictions were put in place in by U.S. Customs and Border Protection (CBP). The restrictions, nearly one year in effect, were based on a health recommendation issued by the U.S. Department of Health and Human Services. The travel ban impacts those transiting by land from Mexico or Canada. This mostly impacts non-immigrant visa holders allowed to enter the United States as a tourist. Without additional approval, they can travel within 25 miles of the border but remain no longer than 72 hours.

To obtain the nonimmigrant visa, the applicant must show evidence of a residence in their home country that they do not intend to abandon. Many use the visa to shop in local stores and return same-day. Local businesses near ports of entry have relied on these steady customer bases for generations. In one town, streets once bustling with legitimate visitors from Mexico are nearly empty. Stores have shut down as the ban has lingered long past what most believed to be a temporary precaution. No community is immune from the trend.

Pedro, a local merchant in Eagle Pass, Texas, sells wares and secondhand items at a flea market. He now sees only a handful of buyers each day he opens his booth.

“It’s not fair that we have lost so much of our business–but others cross illegally and no one cares” he says, as he looks toward the International Bridge in Eagle Pass. The bridge–normally lined with pedestrians waiting to cross for commerce–is nearly empty.

In Spanish he adds, “The government may not think the travel is essential to come shopping, but to those that cross and us who sell, it is everything. We wear masks. They can too.”

Being on the border, most residents are aware of the issues related to COVID-19 struggles as communities are experiencing firsthand the crisis involving asylum seekers who enter illegally. 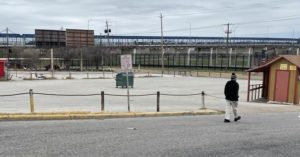 What they say they do not understand is the double standard applied to their cross-border customers. The Texas Border Coalition (TBC), an association of mayors, county judges, and economic development commissions made several attempts to see the ban lifted. In a June 2020 letter to Chad Wolf, then the Acting Homeland Security Secretary, Cameron County Judge and TBC Chairman Eddie Trevino Jr, wrote, “As the United States and state governments work toward easing stay-at-home restrictions, foreign travel suspensions limiting entry to the U.S. have not seen a similar easing.”

“We must protect minority-owned small businesses, cross border trade, and the influence of daily travelers between our countries who invest in binational commerce through the goods and services they acquire,” Trevino added. “The pandemic has put a halt to this critical exchange of business and has left border cities economically paralyzed.”

The plight and pleas of community leaders, border residents and business owners have thus far received little attention. The next expiration date for the ban is March 21, 2021.